Violinist Grant Donnellan is a native of Ferndale, Wash.  He has a B.M. from Oberlin Conservatory and a M.M. from Yale School of Music, where he was awarded the Helen Battell-Stoeckel Chamber Music Prize.  He has been a guest artist at the Governor’s Recital Series, the Cascadia Spring Music Festival, the Marrowstone Music Festival, the Holzhausen Music Festival in Germany and more. He has performed concertos with numerous orchestras and is active in the Northwest as a string clinician, recitalist and chamber musician.  He is currently Professor of violin at Western Washington University, Music Director for the North Sound Youth Symphony and Concertmaster of the Whatcom Symphony Orchestra.

Date: Monday, February 15th, and Tuesday, February 16th 2016 (There is a possibility that classes will extend into Wednesday morning, February 17th, depending on the numbers) 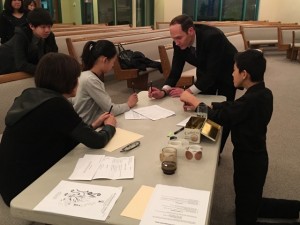